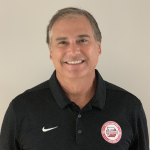 The Score and Save Soccer Academy is under the direction of Rob Russo, the former Head Men's Soccer Coach at Denison University. As a USSF "A" licensed coach he has been involved in the Olympic Development Program at both the state and regional level. In 2015 Coach Russo surpassed the 400 win mark and is one of only 30 Coaches in the history of College Soccer to achieve this feat. Coach Russo teams have been selected to participate in 14 NCAA tournaments. He has coached 16 All-Americans, 3 National "Players of the Year" and 5 of his former players have gone on to play professionally.

There are no events at this time.